Follow These Safety Tips When You Hike in Bear Country 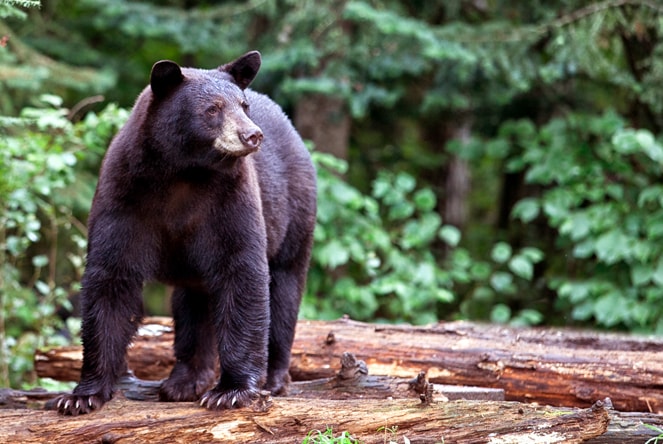 Hikers need to reconcile two contradictory ideas before hiking in bear country: The odds of being injured by bears are quite remote. But you also can’t ignore the potential for bear attacks. The stakes are simply too high, so it’s essential to follow bear safety tips.

The Greater Yellowstone Coalition puts the chances of being injured by a grizzly bear in Yellowstone National Park at one in 1.9 million.

But in July 2011, the park experienced its first bear-related fatality since 1986 when a grizzly sow defending her cubs attacked two hikers on the Wapiti Lake Trail. And not long after, Yellowstone wildlife officials had to kill a different grizzly bear when it acted aggressively toward park visitors during several different incidents.

The potential for bear encounters is also increasing. More people are out on trails and development along the wildland-urban interface has infringed on bear habitat.

And changing patterns in bear behavior are bringing the animals closer to populated areas than ever before. A New York Times article described how climate change has forced grizzlies to forage more widely because of the decline of whitebark pines, which produce pine nuts that the bears depend on in their diet.

Add it all up and it’s definitely a good idea to familiarize yourself with bear safety tips before heading out on a hike. There’s no need to be overly fearful. Just prepared.

North America is home to three species of bears.

But because most of us aren’t likely to head out for a day hike in the Arctic, I’ll skip polar bears and focus instead on grizzlies (also known as brown bears) and black bears.

What to do if you see a grizzly bear?

Range: Grizzlies have been eliminated from 98 percent of their native range in the American West and the Great Plains, according to the environmental organization Defenders of Wildlife. They’re now found from Alaska (the population there is 30,000) through western Canada, and down through parts of Washington and into the Northern Rockies. About 600 grizzlies live in the Greater Yellowstone Ecosystem, which includes Yellowstone and Grand Teton national parks.

Color: Although there’s considerable variation in color, grizzlies tend to be browner and redder than black bears.

Distinguishing Traits: Grizzlies have a prominent hump on their back. Their ears are small and rounded.

What to do if you see a black bear?

Range: With an estimated population of 300,000 animals in the U.S. across 40 states, black bears are much more numerous and widely distributed than grizzlies.

Size: Larger males can weigh more than 500 pounds but most average between 150-300 pounds.

Color: Despite their name, black bears have great color variation. Cinnamon-colored black bears are not unusual and many also have prominent white chest patches.

Distinguishing Traits: Light-colored chest patches. Prominent ears and more of a direct line from forehead to the tip of the nose than grizzlies. Grizzlies have a much more defined brow.

Be bear aware. Bears frequently use h﻿﻿iking trails, so pay attention and look for signs of recent activity: clean pawprints, scat, and trees with fresh claw marks. Avoid any carcasses you may come upon because bears will defend their kills.

Hike at safe times. Chances of bear encounters are more likely around dawn and dusk. Yellowstone National Park recommends against hiking after dark.

Make your presence known. Try not to surprise bears. Bear country is one place where you need to break the rules of trail etiquette. Wear bear bells, blow a whistle, sing, and clap your hands as you hike down the trail.

Hike in a group. When Banff National Park imposed strict seasonal rules for hiking in bear country, it required visitors to stay in tight groups of at least four people. Be sure to keep children close to you at all times.

Be cautious in areas of dense vegetation. Use extra care (and make extra noise) in trail sections with limited visibility and hearing. Dense thickets, especially areas with a heavy concentration of berries, are prime bear habitat. There’s also a chance that you may surprise a bear as you round a bend. And when bears are feeding along streams, the noise of rushing water may make it harder for them to hear you.

Leave the dog at home (or keep it on a leash). Your dog may try to protect you and will confront a bear farther up on the trail. If there’s a chase, your dog can easily lead the bear right back to your group.

Carry bear spray. According to the Denali National Park and Preserve website, pepper spray effectively deters grizzly attacks 90 percent of the time. But it’s a last resort defense and no substitute for following basic bear safety guidelines. Be sure to also familiarize yourself with how the spray canister works before you head out.

Stay calm. If the bear hasn’t noticed you, try to leave the area. Speak quietly and don’t make threatening gestures or do anything else that may provoke the bear. Never approach a bear for a closer look or a photograph.

Back away. Keep your eyes on the bear but avoid direct eye contact. Bears may consider that aggressive behavior. Waving your arms is okay.

Never feed bears. Bears are omnivorous eating machines and are constantly searching for food. If you put out food so you can observe bears, they may begin to associate humans with feeding. That can mean serious problems for other people and for the bear too. As the saying goes, “A fed bear is a dead bear” because wildlife officials often kill bears that get into the habit of approaching humans for food.

Watch out for cubs. The most dangerous bear encounter is with a mother defending her cubs.

Don’t run. Bears can reach speeds of 35 mph. That’s more than 500 feet in 10 seconds. Usain Bolt couldn’t outrun a charging bear, so neither can you.

Look for warning signs. Stomping of feet, swaying, woofing, clacking of jaws, ears flattened against the head, and a steady glare are all possible precursors of an attack. But a bear rearing up on its hind legs is more a sign of curiosity than a hint of imminent aggression.

How to Survive an Attack

Don’t panic. Both grizzlies and black bears often try to intimidate with bluff charges. And they can certainly be quite intimidating. Bears will run at full speed then peel off or come to a halt—sometimes within 10 feet of you. Some experts suggest throwing an object to the ground to distract a charging bear. But keep your daypack on because it might provide a bit of protection if the bear does attack.

Play dead with grizzly bears. Curl up in a ball or lie face down and clasp your hands tightly against your neck and the back of your head. Try to remain as still and silent as you possibly can. Not easy.

Catching Bass After the Fall Turnover

OutdoorGuider is a participant in the Amazon Services LLC Associates Program, an affiliate advertising program designed to provide a means for sites to earn advertising fees by advertising and linking to Amazon.com.