Where and How to Fish by Trolling, Drifting, or Fishing from Shore 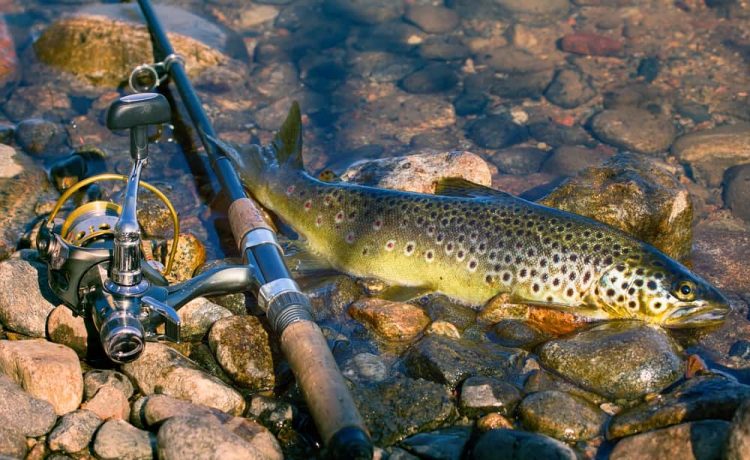 After ice-out in late winter or early spring, trout lakes begin to warm on the surface. Trout may be found at any level at this time and are often within the upper strata, 20 feet or less, of a lake, or in shallow water close to shore.

Thermal discharges, tributaries, rocky shorelines, and the like contribute to warmer water locales. Warmer in this instance may be 46 degrees as opposed to 43 or 44 degrees throughout the rest of the lake.

Other pockets of water warmer than the rest of the lake may be found, and they can hold catchable fish.

In most big and small lakes and in many impoundments, tributary outlets (which also can be described as lake inlets) play a critical role in trout behavior and fishing success in the spring. Predator and prey species come into near-shore areas influenced by tributaries because of the presence of food and more comfortable conditions.

In the spring, rivers, streams, and the outlets of upstream dams bear the rain and melted snow runoff that helps “open up” the lake. A warm rain is a blessing for a big body of water that has a major tributary. It sometimes takes two or three days for a heavy, warm rain to have an impact throughout a big lake system. The area closest to the inlet tributary, however, will often warm up first and be especially worth fishing if it’s not too muddy. Water that is clear and a few degrees higher in temperature is preferable in the vicinity of an inlet.

Don’t overlook the importance of fishing in and near tributaries and their environs for early season trout fishing (plus walleyes and some other species, too), and be alert to the influence of a warm rain on trout activity.

Note also that while main tributaries, or large flows, have the biggest influence on a lake, small creeks and other sources of potentially warm water are also good places. They may not warm up a large area, but they can still attract small forage and thus trout cruising for food.

When trout are shallow early in the season, they can be caught by trolling, casting from shore, or drifting with bait. Trolling allows you to cover a lot of ground and look for active, aggressive fish, particularly trout that have not been spooked or otherwise bothered by other anglers and boaters. On large lakes, you can spread out and get away from others, especially on weekends when more anglers are fishing.

Drift fishing is usually a live-bait proposition. Many anglers are quite successful with this technique using the prevalent forage, such as alewives, for bait, but it is slow and arguably less productive than trolling a lure from a boat under motor power. In lakes where motor use is prohibited, drifting may be advantageous when there is a moderate wind, and if you can fish multiple baits at different depths and distances from the boat. Covering water is always an issue so the more you spread things out the better.

Be Aggressive from Shore

Shore-based anglers may be limited to one spot, such as a pier or breakwall, and must cast repeatedly in hope of attracting a moving, incoming fish. This can pay off near inlet areas, where warm river water attracts a significant number of fish. It is also possible to “troll” in a sense by walking up and down a breakwall, using a castable sideplaner to get your offering out and away.

In small lakes, however, it pays to be mobile, concentrating shore-casting efforts near prominent points, inlets, steep banks, rock- and boulder-studded shores, shorelines with sharp dropoffs to deep water, and warm bay and cove areas. These are the same places you’d work by trolling, the difference being that you can cover far more water more thoroughly in a boat.

Catching Bass After the Fall Turnover

OutdoorGuider is a participant in the Amazon Services LLC Associates Program, an affiliate advertising program designed to provide a means for sites to earn advertising fees by advertising and linking to Amazon.com.